At the end of 2011, John Endlich’s more than forty years of research into Dutch silver miniatures culminated in the publication of the standard work, ‘Dutch silver miniatures of the 17th and 18th centuries’, written at the request of The Hague’s Gemeentemuseum. The book, which sheds new light on this typically Dutch area of collection, subsequently also served as a catalogue and handbook for the highly successful exhibition, XXSmall, over poppen, poppenhuizen, zilveren en andere miniaturen (= XXSmall, about dolls, doll’s houses and [silver] miniatures), held at the Gemeentemuseum from 12 November 2011 through 25 March 2012.

Years of research in both private collections and those of numerous Dutch museums preceded the book’s publication, and the many thousands of pieces of data collected were all archived in a special database, where theybremain available for further research.The thousands of photos resulting from Dick Endlich’s two-year-long involvement in the project also form an important component.

Dutch silver miniatures of the 17th and 18th centuries’ is also the first work of its kind to devote detailed attention to the significance and diversity of silver miniatures of the 17th century.In addition, the inclusion of thebhallmarks of some 170 of these extraordinary and highly specialised silversmiths –many never shownbbefore –make the book a valuable reference work for (international) collectors and antiquaries, as well as hobbyists. Further, the work reveals how aspects of urban and country life, particularly in and around Amsterdam, functioned as a source of inspiration for the creation of silverbminiatures – for example thebprominent role played by the mazes and fives courts of 17th-century Amsterdam.

The book containsmore than 850 illustrations.

The contributions of Jet Pijzel-Dommisse (curator, Gemeentemuseum, The Hague)and of Dirk-Jan Biemond (curator, Rijksmuseum Amsterdam) also confirm the importance of this area of enquiry. 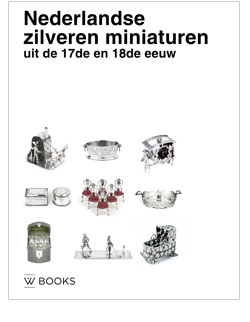