Of typical form, the wide upper part mounted with a flaring silver lip mount, finely engraved with numerous huntsmen on horseback, set against a village background with a church, houses, peasants and dogs, the whole below an engraved border of foliage, held by a reeded band issuing leafy lappets, further down the vessel a plain silver escutcheon, the finial formed as a tapering mount engraved with foliage, mounted onto the horn with conforming lappets and reeded band, issuing a smooth globular bell with reeded band at the terminal.

This drinking horn, with its beautifully engraved silver mounts, is an extremely rare piece of craftmanship. It consists of the horn of a bovid and is used as a drinking vessel. Drinking horns are known from Classical Antiquity, especially the Balkans, and remained in use for ceremonial purposes throughout the Middle Ages and the Early Modern period in some parts of Europe, notably in Germanic Europe, and in the Caucasus. 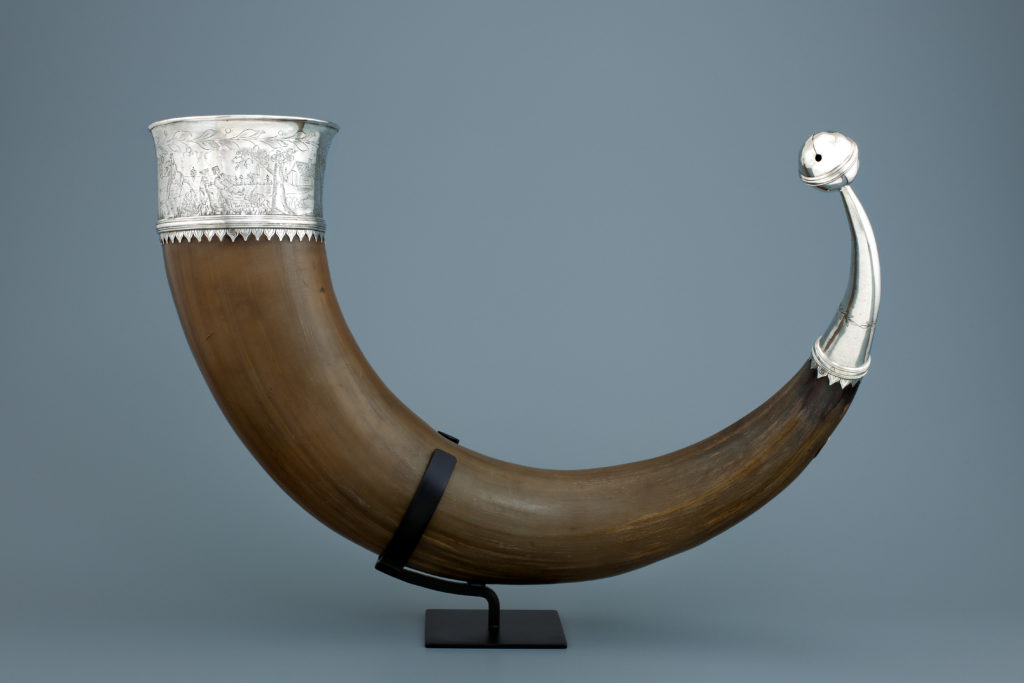 Drinking vessels made from glass, wood, ceramics or metal, styled in the shape of drinking horns are also known from antiquity. The ancient Greek term for a drinking horn was simply keras (plural kerata, horn). To be distinguished from the drinking-horn proper is the rhyton (plural rhyta), a drinking-vessel made in the shape of a horn with an outlet at the pointed end. From the start they were meant for ritual toasting and drinking with other companions, during feasts and special cultural occasions. Romans and Germanic peoples used the horns of aurochs during festive and offering meals, because people believed the power of the animals lived on in the drinking vessel. Drinking together and using one vessel strengthened brotherhood and therefore drinking horns could not be put down. For this reason the horn had to be passed on from hand to hand.

Many drinking horns have a small silver bell at the pointed end of the horn, however, it has not yet been clarified why this was done. One hypothesis is that because most drinking horns have no base or foot and cannot be put down once filled with liquid, the bell was added as a warning and may have served to alert the neighbouring dinner companion to indicate that his ‘sip’ was getting closer.  When put down, the vessel’s contents would be pouring out of it, so the passing to other companions and, in turn, each individual taking a sip, was a logic solution. Moreover, it was not unusual that guests had fallen asleep or dozed off because they had had too much to drink or because they were engaged in a deep conversation with other guests, hence not realising that their  turn to drink from the drinking horn was imminent.

Drinking horns such as this and other examples were manufactured as commissions from the guilds and noblemen; some even ended up in churches. During the Middle Ages the Church tried to exterminate the use of this heathen customary tradition. When this failed they implemented a Christian meaning to drinking in companionship and this is why so many horns ended up in church treasures. 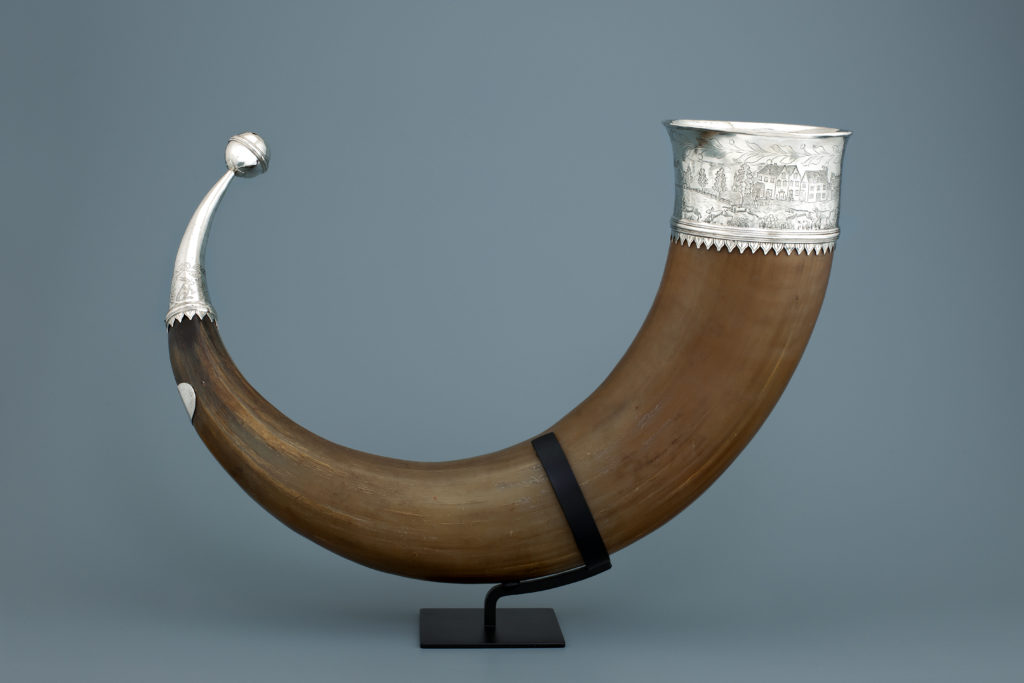 From the 16th century onwards a renewed interest in old and ancient customs emerged. Germanic traditions were recovered and drinking horns with silver mounts became fashionable within the guilds. In Friesland (formerly known as Frisia) Germanic ancestry of the custom was even more cherished. Already in the early 16th century a Frisian chronicler, Worp van Thabor, wrote that Frisians were drinking excessively during guest meals: ‘… since they have enormous horns of wilde animals, of great content, with golden and silver plates surrounding the opening’ (cited in Ten Hoeve, 2005, see Literature).

Most of the drinking horns with silver mounts that are still known today have a Frisian origin. In De Stavelij, 2011 a list with drinking horns is published. Most of them were made by Frisian silversmiths. For those who study the list it can be established that the majority of drink horns were owned by guilds. It is remarkable that horns from e.g. Amsterdam Archers guild are in fact mounted on a foot, this foot, which also served as a handle, made the passing and jointly drinking easier, More importantly however, was that the horn could be put upright, standing on its own, hence showing off to greater honour and glory of the guild. However, most drinking horns do not have feet.

Particularly in Friesland many of the drinking horns were not owed by the guilds or church guardianships, but belonged to noble or upper class families. Often these horns are younger than those commissioned by the guilds. Possibly the clients of such 17th century vessels wanted to pretend as if their families originated form old tradition and therefore commissioned such pieces from their local silversmiths. Of both the Camstra as well as the Fogelsangh families such drinking horns are still extant. Of various other vessels the clients are unfortunately not known. Most of these horns are now in museum collections. Identification of the earliest owners is only possible through inscriptions that were eventually engraved on the silver lip mount. The example discussed here was manufactured at Kollum, Friesland. Houses, peasants and a canal serve as the background for a hunting scene, and are all finely engraved on its lip mount. 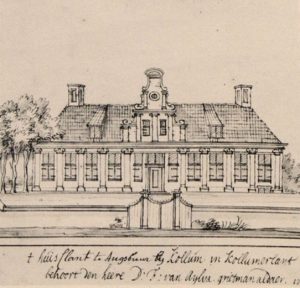 The fact that wealthy families in and around Kollum owned drinking horns has become evident from the inventory of Feijo van Scheltema, who was a council of the Admiralty of Harlingen and also active as ‘grietman’ (predecessor of burgomaster and judge in Friesland). He owned an estate named Ausburgh, in the immediate vicinity, southeast of Kollum. He passed away in 1666 but his estate and inventory was only made up in 1675. Amongst the silver objects we find ‘a chased silver water jug and basin, a fruit castor and three large silver candlesticks […] a large horn with silver mounts’ a.o. (cited in Van den Berg, 1989, see Literature).

On a painting now kept in the Fries Museum, Leeuwarden, an important family is depicted while having drinks and food at a abundantly laid table. The man depicted to the left holds a large drinking horn in his hands. This proves that such vessels were considered as an important piece of ‘pronk’ ware within Frisian families. Also the horn held by the company represented in this picture would have been passed on between all present. No other drinking glass or vessel is to be found on the table. In the background we observe a servant who walks away to refill the pitcher. 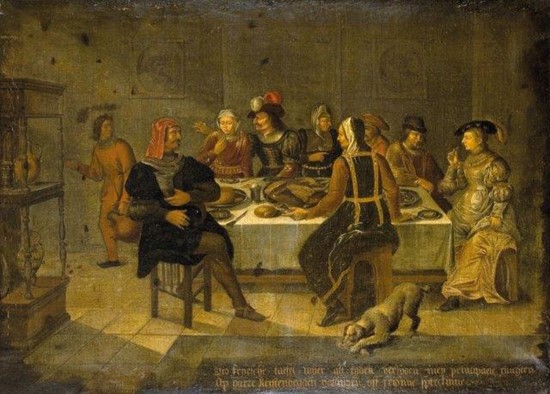 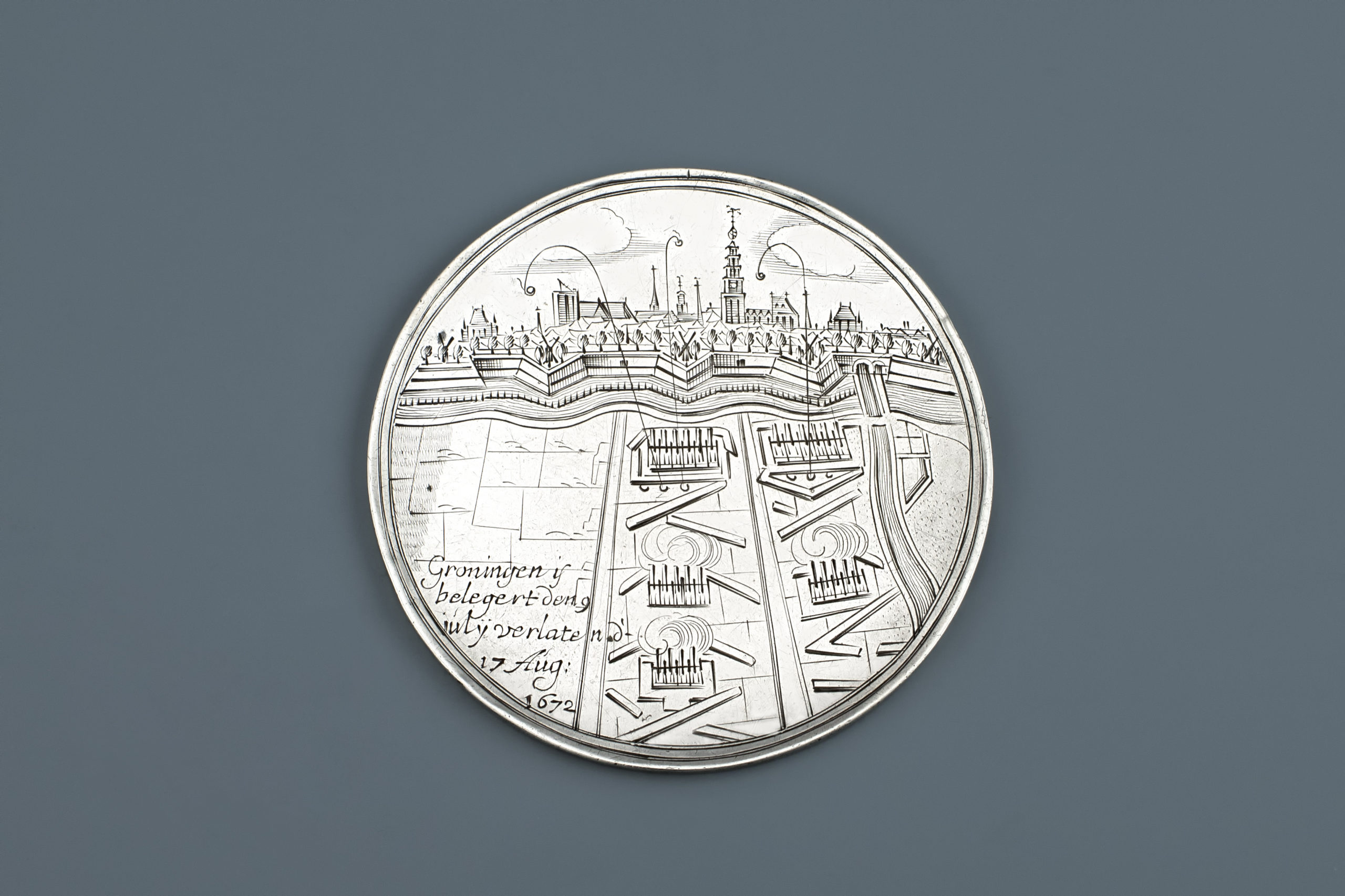 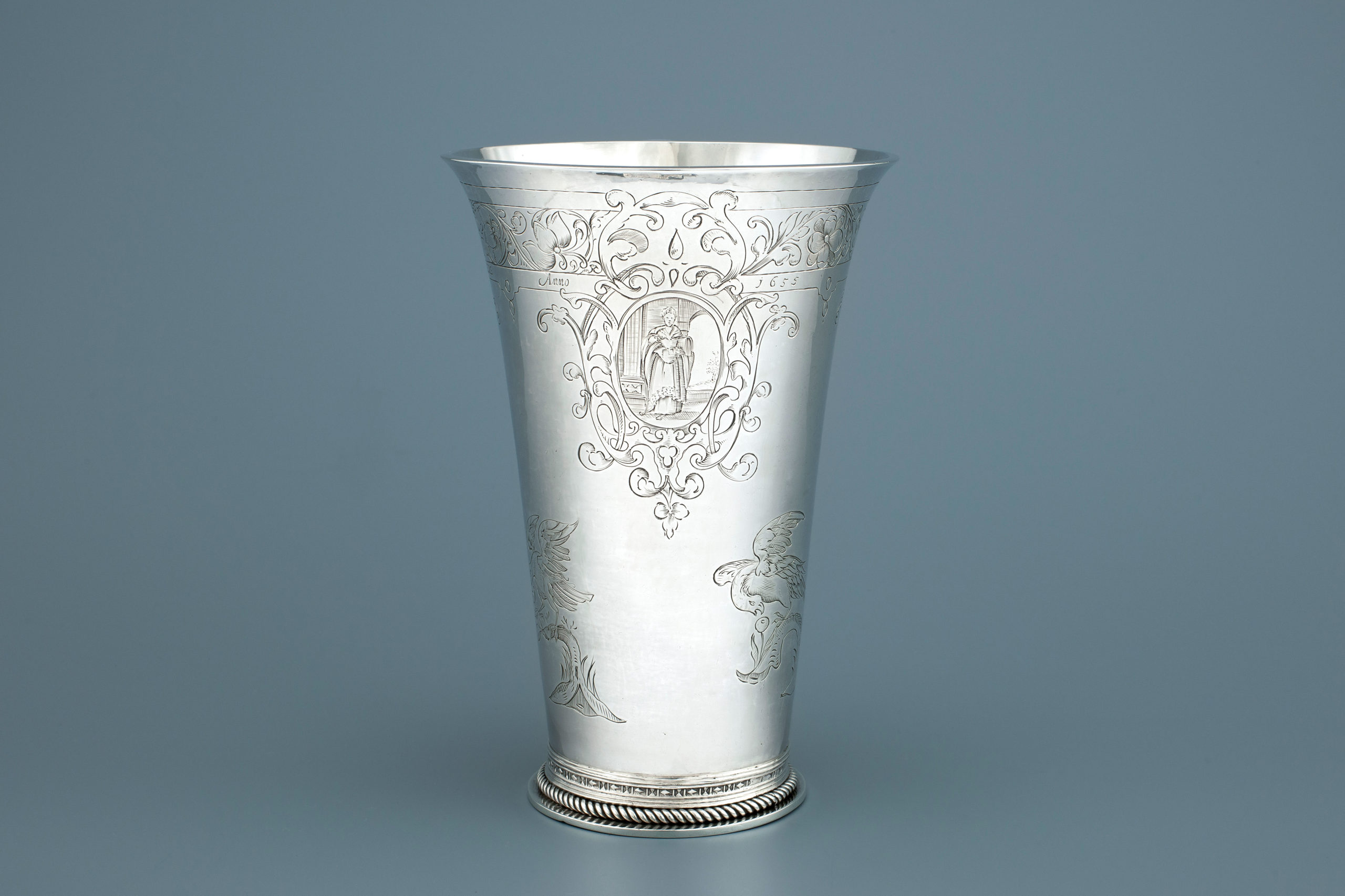 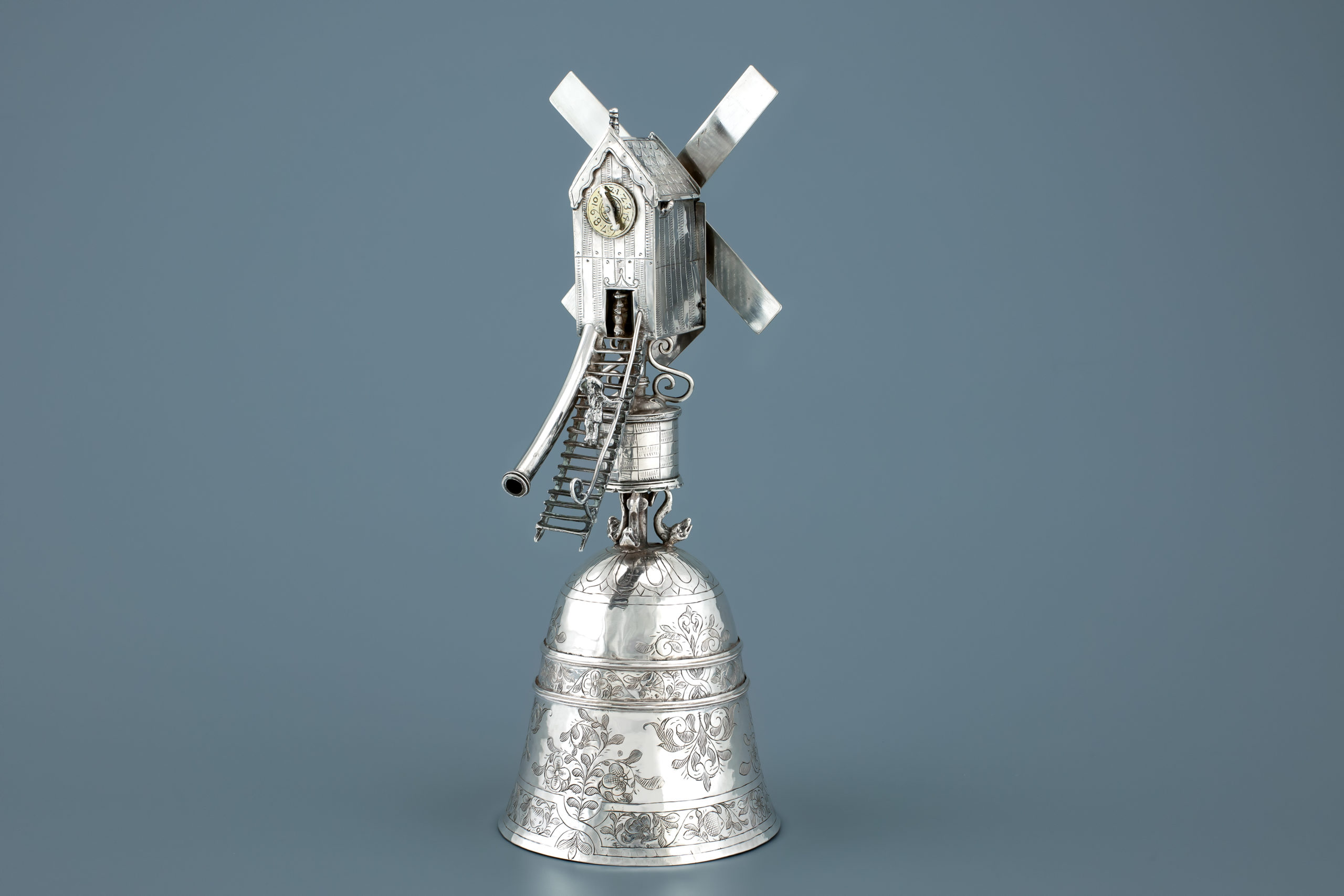 The cup engraved with flowers and foliage above flower bandwork, the lower rim of the cup with engraved…