Of circular section, the flat and smooth independent cover beautifully engraved with the coat-of-arms of the Seven United Provinces, a shaped shield below a crown containing a Dutch Republic lion passant to left below a crown, holding a sword in his right claw, and a bundle of seven arrows in his left claw, the shield held to either side by another larger lion passant wearing crown, both standing on a banderole below with the text CONCORDIA RES PARVAE CRESCUNT (‘Unity makes small things grow’, in Dutch Eendracht maakt Macht), the heraldic motto of the Dutch Republic, the smooth edge with reeded banding to upper and lower rim, containing two holes through which the silk cord of the wax seal was attached to a document of political bearing, possibly a treaty between the Netherlands and another country, or a commission confirming the appointment of an ambassador or high-ranked army officer.

Seal boxes were used to house the wax seals used on important documents. The engraving in the box discussed here is based on the reverse of the reward medal (‘beloningspenning‘) designed by Laurens van Teylingen, between 1628 and 1637. This medal has the States General’s Lion, the device of the States on its obverse, and the coats-of-arms of the seven provinces on the reverse.

A gift in another form than a medal was exceptional; for instance a gold beaker on foot with cover with an identical engraved motto was made for Frederik van Sirtsema van Grovestins in 1709 (see Pijzel-Domisse, Haags Goud en Zilver).

The inscription Concordia Res Parvae Crescunt is based on Sallust’s Bellum Iugurthinum X.10 and became the motto of the Dutch Republic from 1581 until 1795 and during most of the Napoleonic times (1802–10). The Dutch Republic Lion (also known as States Lion) was the badge of the Union of Utrecht, the Republic of the Seven United Netherlands and is a precursor of the current coat of arms of the Kingdom the Netherlands. The motto continued to be used in the country until 1816 when it was replaced by the current Dutch motto Je maintiendrai (I will uphold). 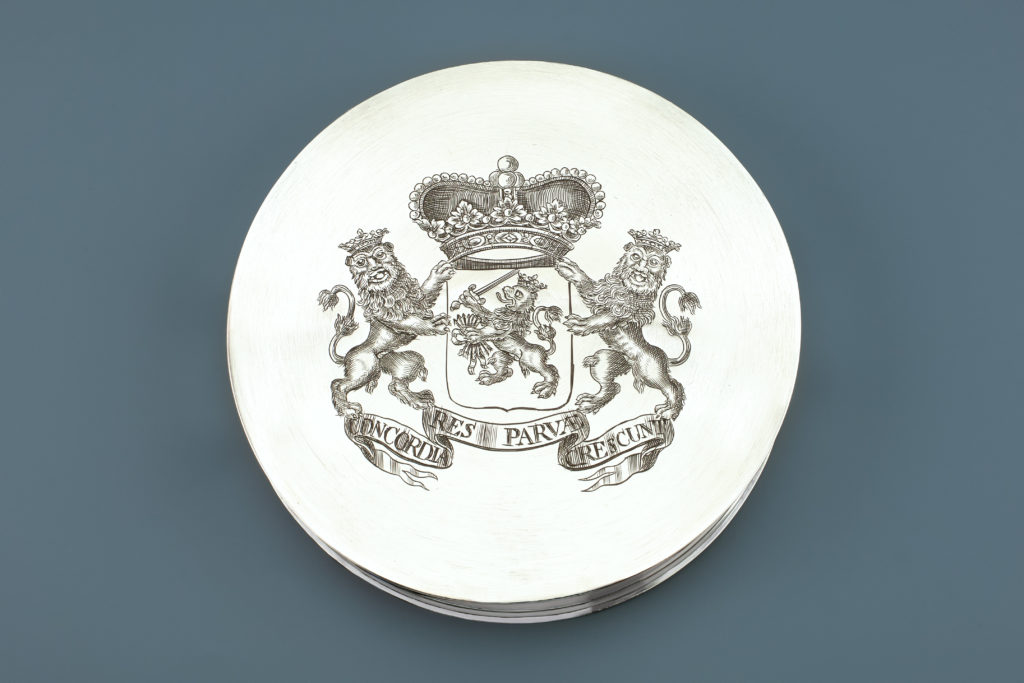 ‘Unity makes strength’ was recorded for the first time in the Netherlands in the book Gemeene Duytsche Spreekwoorden (Common Dutch Proverbs) in 1550, whilst the area was still within the Spanish Empire and under the rule of Charles V. After the Dutch gained independence, the new Dutch Republic took over the phrase as its motto and it appeared on several of its coins and coats of arms, usually in the original Latin form, referring to the new state’s initially small territorial size. From the late 16th century onwards the start of the motto was frequently used on Dutch coinage, such as the Leicester-rijksdaalder in 1586.

In the collection of the Rijksmuseum, Amstrdam, is a silver seal-box, made by a hitherto unidentified silversmith, possibly in The Hague in 1663, of which the cover is engraved with a device with coat-of-arms below a crown, surrounded by a chain and held to either side by a crowned sheep passant, holding a banner with fleur-de-lys pattern; this box is presumably commissioned by Cornelius Lampsins (1600 Vlissingen 1664), and is related to a diploma given by King Louis XIV, in which Lampsins was appointed Knight of the Order of St Michel and Baron of Tobago (inv. n° NG-388.0). 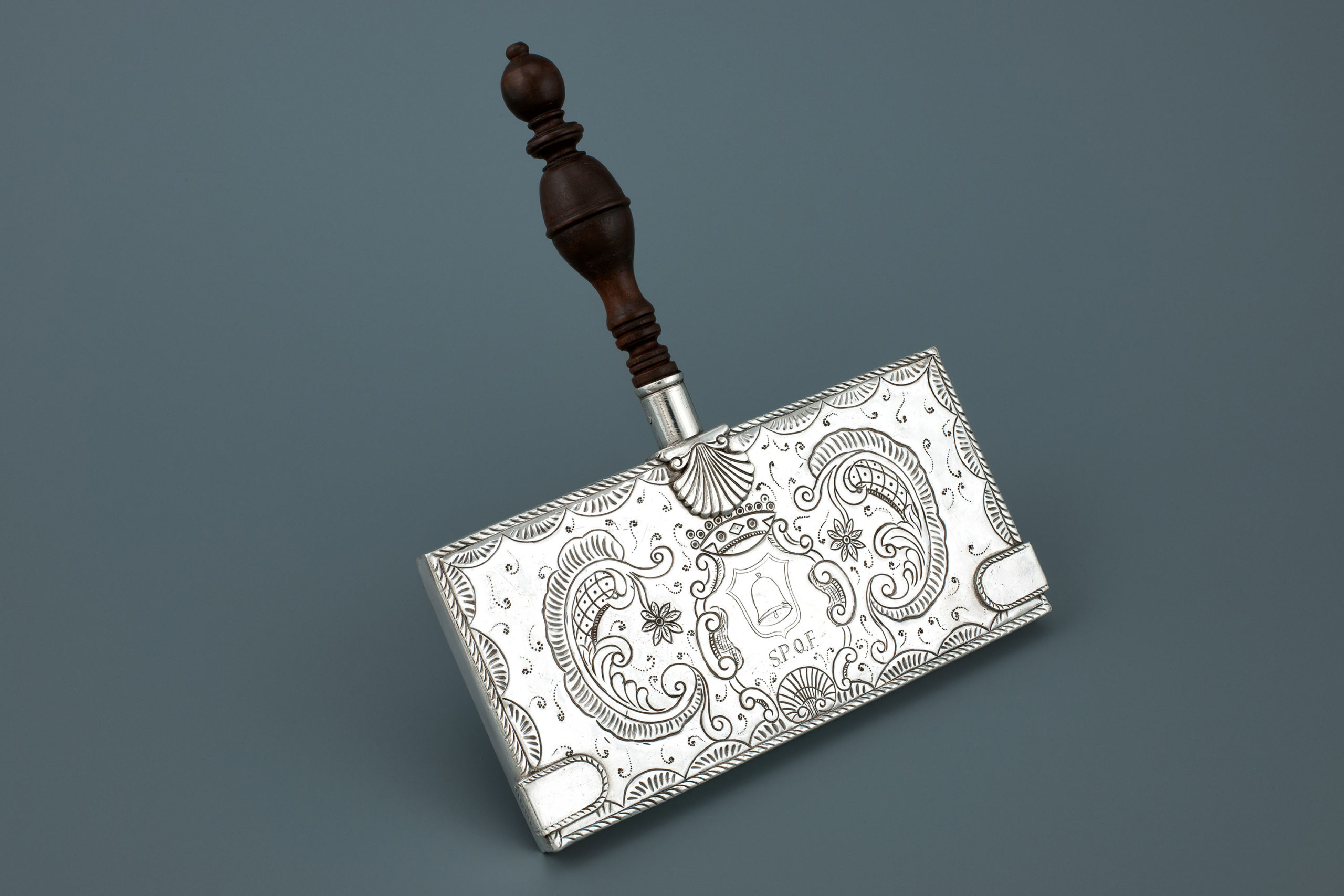 Of typical rectangular section, the top surface engraved with a scrolling, foliate and stylised volute cartouche in Louis… 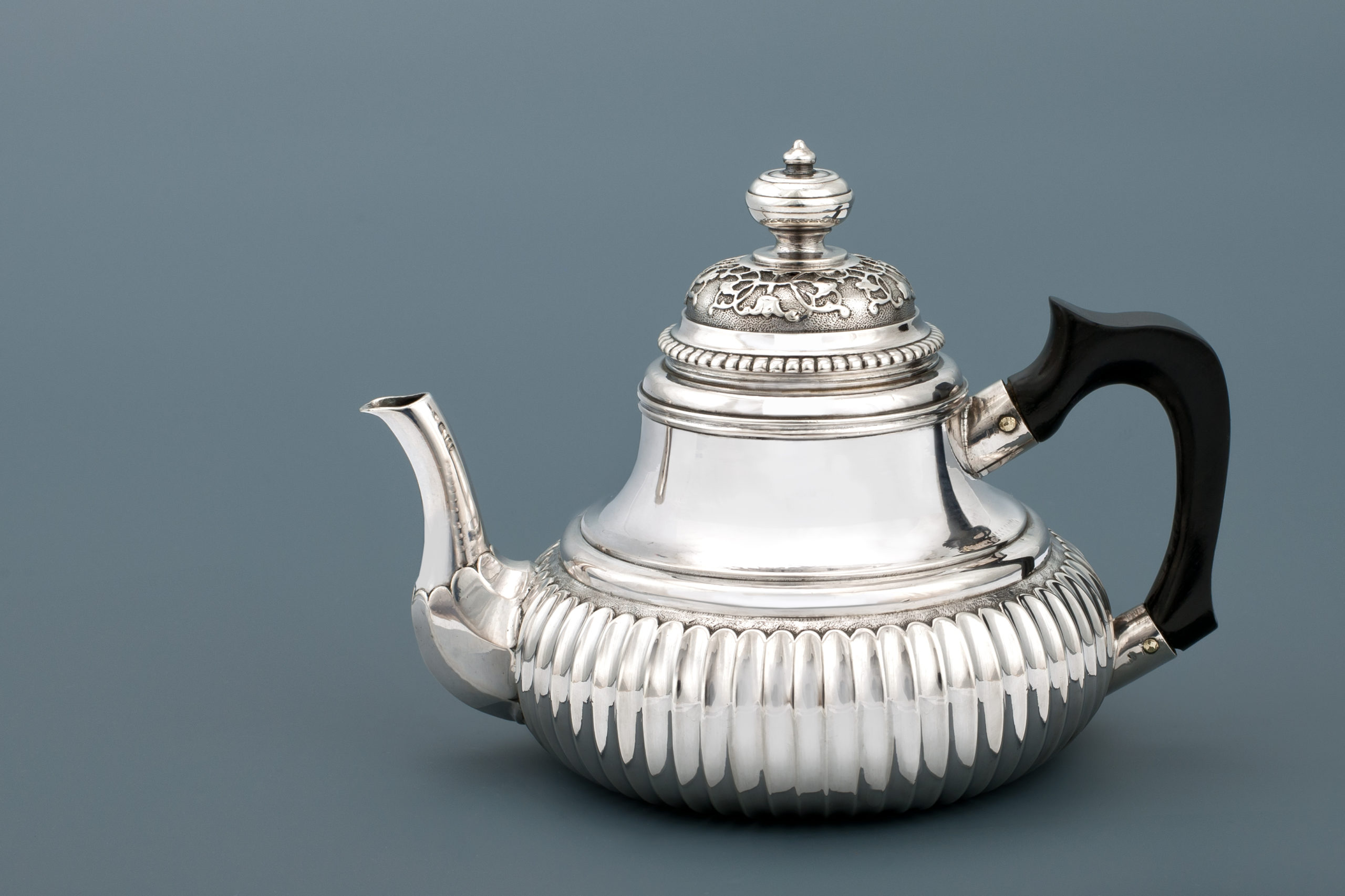 Of compressed baluster shape, the lower part of the body fluted beneath a smooth ribbed band, the waisted…