The body of circular section, on ringed spreading foot applied with serrated silver mount, the smooth body with two plain bands between profiled ribs, attached a plain S-scroll handle, with hinged scallop thumbpiece, the slightly domed cover engraved with a family coat-of-arms, of the Van Donia-Haytsma family, consisting of shield below a crown topped with nine bullets, divided in two, the left side with a lion rampant facing right, the right side containing a rose above a three leaf clover, the shield flanked from underneath by ribbon-tied foliate branches.

The tankard is made of serpentine, or serpent rock, a hardstone that is mined in northern Germany, and found in several colours, ranging from olive green to pale greenish tints and from ochre to reddish brown hues. The material is relatively soft and can be easily turned. Already during the 16th century it was a precious commodity that was excavated in the mines in Saxony, where a prosperous production was established, and from where large numbers of vessels were exported. The containers were turned with small bulges which made fixing precious metal mounts onto the vessel easier. Mainly tankards, jugs and mazers (bowls) were manufactured and these were delivered to silversmiths all over Europe, who finished the objects with silver mounts made locally.

Since many hardstones such as serpentine were believed to possess miraculous powers to protect against poison, a tankard such as this would have been an expensive piece and emphasised how precious the owner considered his good health. Since killing one’s opponent by poisoning him was quite common during the Middle Ages, people in high places had special tasters, who would try their master’s food and drink first. If the servant fell dead, the master was a forewarned man.

The combined use of silver and serpentine is quite rare in the Netherlands. Because serpentine is a relatively soft stone, the silver mounts protect the material from being damaged. The mount surrounding the base of the tankard is serrated into stylised foliage and is clamped around the base, while the other bands are mounted with a hinge and pin. The hinge for the stepped rounded lid is fixed on top of the S-scroll handle and has a scalloped thumbpiece.

The arms belong to a couple, albeit that they share one shield. For this reason the man’s lion rampant is reversed from the so-called courtoisie héraldique, so turned towards his wife’s arms, as a courtesy to her. The arms are those of Keimpe (Kempo) Keimpes van Donia, born circa 1594, the son of Keimpe (Keimpo) Sydses van Donia (Harinxma) and Doed Wilckes (van) Holdinga), who married Ebel (Iebeltje) Bonnes Haitsma (Haytsma), the daughter of Bonne Tjerks (van) Haytsma and Janke (Johanna) Juws (van) Botnia (Bothnia), from Makkum. The couple married at Beetgum on 4 April 1619. Ebel died at Menaldum on 24 April 1653, her widower Keimpe van Donia passed away there on 7 August 1660. They are buried at the church at Menaldum. 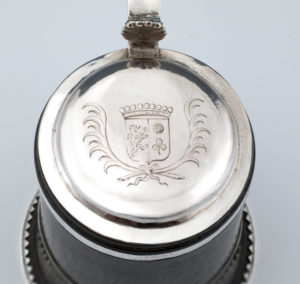 The Van Donia-Haytsmas were a very wealthy couple and lived at Hemmema State (also known as Doniastate), near Beetgum, which fell under the council of Menaldum. They are mentioned on the list of church members of Beetgum from 1645. From their marriage six children were born. The eldest daughter, Rixt van Donia (1620-1681) married in 1638 Watze Frans (or, in Latin, Valerius Franciscus) van Cammingha (1603-1668), who was heir and freelord, ‘erf- en vrijheer’ of the isle of Ameland.

In 1658 Keimpe van Donia drew up his will. He bequeathed sums of money to the poor and several churches. The Hemmema state was bequeathed, together with its contents, to his then unmarried children: Syds (also known as  Sixtus, 1622-1667), Bonne (Bonifacius, 1625-1665) and Sjouk (Sussana Margriet, 1628-1666, who had married Tjalling Hommes van Camstra); the lands and estates (‘states’) from the Beetgum neighbours until Westerwird, circa 265 ‘pondematen’ (equivalent of about 100 hectares) went to Syds as well. They also received the grave as well as the bench for the lords at the Menaldum church. Daughter Rixt, who already owned the castle at Ballum, received Jelmera-state, a castle on Ameland, the strengthened ‘stins’ (stone house) Amelandshuis at Leeuwarden, the Waltastate at Tjerkwerd and the Heremahouse at Bolsward, next to approximately eight farmhouses with adjoining lands as well as approximately 10,000 carolus guilders. Both Bonne and Sjouk would also receive this amount, as well as a number of farms. Daughters Margaretha (1621-1622) and Barber (1626-1628) had already died during infancy.

However, Keimpe’s wish would not be fulfilled, because only Rixt van Donia, who was widowed in 1672 and lived alone at Hemmema-state, has offspring of her own: apart from four children who died during infancy, one son, Frans Doecke van Cammingha (1654-1680), who himself passed away one year before his mother. Therefore the whole estate was inherited by two distant cousins: Isabella Susanne (Belle, 1640-1681) and Helena thoe Schwartzenberg en Hohenlansberg (1646-1682). After Rixt’s passing they had her estate evaluated. The total land tenure was around 4,000 pondematen (equivalent of circa 1480 hectares); the value of the estate was estimated at the vast sum of approximately 722,500 guilders, so that she and her husband could be reckoned among the richest inhabitants of the Dutch Republic during the Golden Age. The Thoe Schwartzenberg sisters would sell the estate Ameland in 1704 for 170,000 guilders to the widow of stadtholder Hendrik Casimir II, for which reason our current king Willem Alexander may call himself ‘erf- en vrijheer van Ameland’.

On a bench in the church of Grouw exactly the same family coat-of-arms may be found: two crests in one shield, within a cartouche, held by a lion, together with the family coat-of-arms in two shields of the Van Donia crest, again with a reversed lion rampant, of their son Bonne (Harinxma) van Donia, who was a churchwarden in Grouw, and his wife Berber Hommes van Camstra.