The Judgement of Midas

The Judgement of Midas

A gold snuff box of rectangular form by Jean Saint, the lid featuring a fine plaque chased with a scene of King Midas, signed Metayer Fecit 1727. This box was created through the collaboration of two makers: the famed producer of gold snuff boxes Jean Saint (1698-1774) and the talented goldsmith and chaser Philippe Métayer, who was responsible for the superbly decorative lid. Philippe Métayer (1697-1763) and his brother Louis (d. 1774) came from a family of goldsmiths in Rouen, France. Philippe’s presence in Amsterdam was first mentioned in 1725 in the city archives. Municipal records show that on the first day of June that year, the intended marriage was registered between ‘Philippe Metayer van Rouaan, aged 28 living in Kalverstraat and Antoinette Bernard aged 17’. In 1755, Métayer purchased a house in the Kalverstraat, opposite the Gapersteeg, for 8909 guilders. This demonstrates the financial prosperity that Métayer had built up. We know that from 1742, but possibly much earlier, he ran a tobacco shop. The store sign featured the name à la Ville de Paris / in de Stad Parijs (‘in the city of Paris’) and was apparently quite successful. The store was continued after his death, under the name Weduwe Phe Metayer & zoon (Widow Phe Metayer & son). It remained family owned into the nineteenth century.

As already mentioned above, the snuff dealer Métayer was also an important goldsmith. When he registered as poorter (city burgher) in 1726, his profession was listed as dreyver (chaser). Unlike his brother Louis, who was trained as a goldsmith and became a master of the Amsterdam Goldsmiths’ Guild in 1730, Philippe never became a master, nor a member of the guild. As there was a strict distinction between masters and craftsmen, he was unable to carry his own maker’s mark or have his creations inspected by the guild. It is not clear why Philippe was only a chaser and did not establish himself as an independent master despite his artistic and technical skills. In any case, he used the tobacco trade as a source of income. That Philippe probably sold gold snuff boxes from his tobacco store is evident from the fact that the store inventory included sixteen design drawings, which he had commissioned from Louis Dubourg (1693-1775) in the 1730s and had used to chase gold. The series is now kept in the Rijksmuseum. To be able to sell his creations in gold, Philippe collaborated with his brother Louis from 1730 onwards. Louis had registered as a poorter and became a master of the Amsterdam Goldsmiths’ Guild in that year. From then on, much of the Métayer brothers’ work was stamped with his Louis’ mark and signed with Philippe’s name.
The most famous product of the brothers’ collaboration is the gold wedding cup, made for Johan van Borssele van der Hoge and Anna Margaretha Elisabeth Coninck, which was acquired by the Rijksmuseum in 1981. It is one of the finest 18th-century gold pieces in the collection and confirms the practice of collaboration between Phillipe and his brother Louis. Philippe, who was probably the eldest of the two brothers, was already active as a chaser in Amsterdam in 1726. He worked together with other masters for the first few years. This gold tobacco box is an example of such a collaboration. In this case, he joined forces with Jean Saint, also from France. Saint and the Métayers were part of a group of French Huguenot silversmiths who, seeking religious asylum, had fled to Amsterdam during the late seventeenth and early eighteenth centuries and settled in Amsterdam. For the image on the plaque on this snuff box, Métayer followed a print by another Frenchman, Bernard Picart (1673- 1733). Picart also belonged to the close French community in the city; his shop was on the corner of the Singel at the Munt (Mint). Although he was a Catholic by birth, he had converted to Protestantism while in Amsterdam. He later even married a Protestant woman. The Métayers and Picarts visited the same church, which probably triggered the fruitful chain reaction in which a print by one Frenchman was used by another French native for the lid of a third Frenchman’s tobacco box in the Amsterdam’s small Kalverstraat neighbourhood. 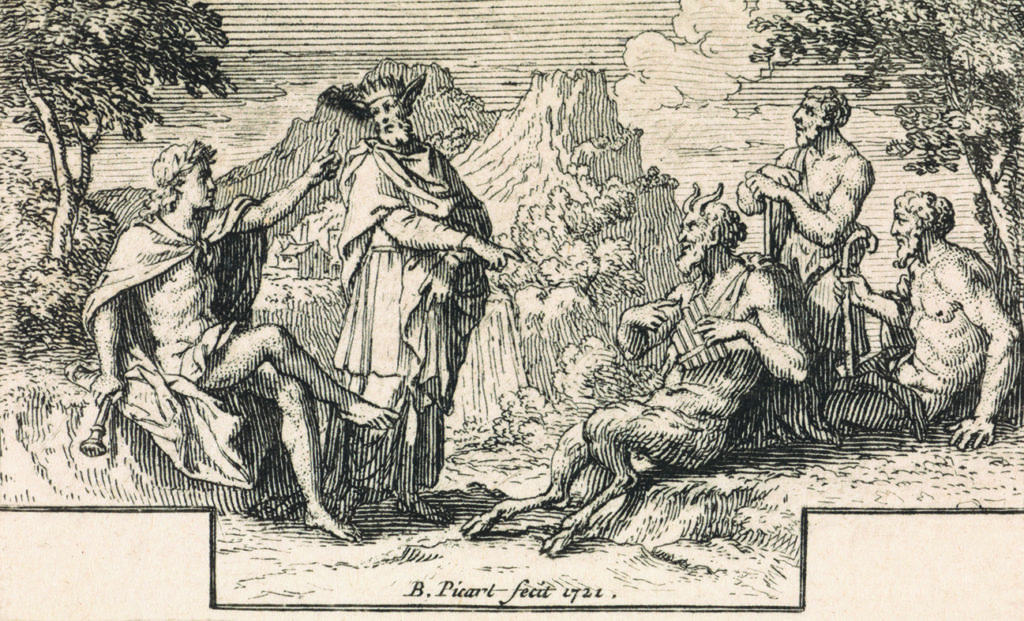 The scene on the lid by Métayer follows the print by Picart and depicts one of the legends about King Midas from Ovid’s Metamorphoses. Instead of the tale in which Midas turns everything he touches into gold, which would have been quite appropriate for the decoration of a gold box, it features the narrative of a musical contest between Apollo and Pan. One day Midas, the king of Phyrigia, is witness to a musical contest between Apollo and Pan. The satyr Pan had challenged Apollo, the god of music, claiming he could play a better tune with his reed pipes than Apollo with his divine harp. The mountain god Tmolos is asked to be the judge. It is agreed that both gods will play a piece, after which Tmolos will declare who is most virtuous. Pan plays a simple melody on the flute, but the audience finds his music rather shrill. When Apollo plays his lyre, everyone is captivated by the beautiful sound. The verdict is simple: Apollo is the victor of the competition.
However, King Midas, who was part of the audience and a favourite of the god Pan, dares to question the decision: ‘You are completely wrong, Tmolos. The prize belongs to Pan!’.

Apollo becomes furious and grabs Midas by the ears to say: ‘Ears that so foolishly judge no longer deserve human form!’ The god then pulls hard at Midas’ ears, making them a lot longer and a thick layer of hair grows over the ears. Apollo has forever given Midas an ass’ ears as a punishment for his poor judgment. King Midas is horribly ashamed of his strange ears and conceals them under a turban. Only his barber knows what strange things are kept hidden under his headdress and is ordered by Midas not to tell a living soul. The young man dares not speak about it to
others but finds it extremely difficult to keep silent. One day, the barber cannot resist any longer and whispers the secret into a hole in the ground. He then quickly fills and the closes the hole again. However, soon after reeds begin to grow from the soil and every time the wind blows through them, the reeds seem to sing loudly: ‘King Midas has ass’s ears! King Midas has ass’s ears!’. When the king realises that everyone knows about his secret, he dies of shame. Picart’s print was copied very precisely, only excluding the figure on the far right of the print, a casual listener, for whom Métayer did not make room in his version.