“The dolls’ house in the Fraeylemaborg in Slochteren is a cabinet dolls’ house in the true tradition of
the Dutch showpiece dolls’ houses. It has four rectangular rooms- a Nursery, a Bedroom, a Salon and
a Kitchen- as well as a domed attic below the arched hood of the cabinet. The cabinet itself is made of
oak and walnut. (…..). The dolls’ house is richly furnished with silver miniatures from the 18th century:
most of them are made by Arnoldus van Geffen and Jan Borduur. An extraordinary English portrait
miniature from the 16th century adorns the wall of the Salon…..”

After thorough research the name of the first owner of the dolls’ house was found: Anna Maria Trip.
She was an internationally orientated woman who would have known about the traditional pastime
of the wives of the wealthy gentlemen in 17th and 18th century Amsterdam: the decoration of dolls’
houses, often inspired by their own grand Amsterdam canal houses. 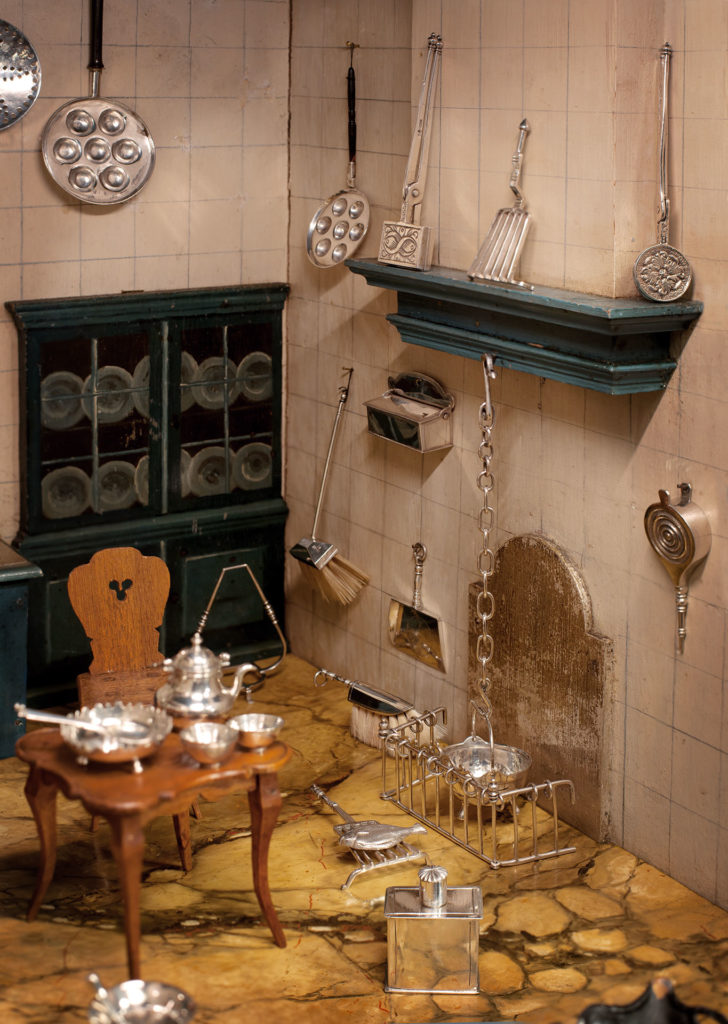 Based on family tales, old anecdotes, a photograph, old letters and sources from archives, the exact
provenance of this dolls’ house is unraveled. Although it may not always be certain when the dolls’
house was handed down to the next generation, we have tried to uncover as much information as
possible. Most of the showpiece dolls’ houses that are in the collections of Dutch museums were
handed down to the next generation through the female line, however, this was not the case with
Anna Maria Trip’s dolls’ house. For various reasons, the dolls’ house was quite often passed on to a son.
The contents of the house are made from various materials such as marqueterie-de-paille, wood, bone,
chintz and of course an exstensive collection of miniature silver. Compared to the other dolls’ houses
the enormous quantity of silver miniatures is striking. Based on the fact that none of the silver
miniatures have a 1807 control mark we can conclude that the all the objects were already part of the
dolls’ house in the 18th century. Although the dolls’ house was originally made as some sort of art
cabinet, it was also, very gently, played with. It’s remarkable that the contents of the house are still,
after 250 years in such a good condition.