Josef Hoffmann ( Pirnitz 1870-1956 Vienna) was one of the founders of the Vienna Secession, an artists’ group with which, among others, Gustav Klimt, Joseph Olbrich and Koloman Moser were involved.

Hoffmann studied in Brno and Würzburg before he enrolled at the Academy of Fine Arts in Vienna where he studied with Karl Hasenauer and Otto Wagner. Together with another gifted student, Joseph Olbrich, he founded the world famous Wiener Werkstätte in 1903. The aim of these artists was to integrate art into everyday life; together with a number of other important artists, such as Gustav Klimt, Egon Schiele and Oskar Kokoschka, they created Gesamtkunstwerke, complete works of art.
Thus the Wiener Werkstätte not only designed houses but also the furnishings within them. The Stoclet Palace in Brussels is an important example of Gesamtkunstwerk. Josef Hoffman and his colleagues designed every aspect of the mansion, down to the door handles and light fittings.

This non-industrial selective way of producing was only meant for the happy few.
Hoffmanns motto was: “If it is not possible to work for the whole market, we focus on those who can afford it”

Besides Western European influences, as those from the Arts and Crafts movement, they also found inspiration from Asia, especially Japan. With its floral, organic and geometric designs, the Wiener Werkstätte clearly anticipated Art Deco.

For his silver objects, Hoffmann often added gems such as lapis, opal, moonstone and agate. His constant use of squares and cubes earned him the nickname ‘Quadratl-Hoffmann’ (Square Hoffmann).
The original design for this box is in the collection of Museum für angewandte Kunst (MAK) in Vienna. 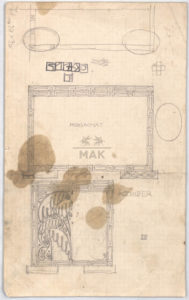