Realistically modelled, with detachable head, on domed base chased and engraved with expressive scenes of birds amongst scrolls and foliage, the underside engraved with a partly obscured coat-of-arms.

This realistically modelled hen in silver is in fact a jug and drinking cup in one. The head can be taken off the body and forms a beaker for which the body is the jug. The hen is standing on a circular foot chased with birds between masks and foliage. The birds can be traced back to a print by the Flemish engraver Hans Collaert (circa 1530 Brussels – Antwerp circa 1580). Collaert was not the first who designed friezes with birds, before him Virgil Solis (1514 Nuremberg 1562) also had produced such bird prints in Nuremberg. These prints served, just like other prints, as source of inspiration for decoration of objects. The same birds can be found on the foot of a rock-crystal bird with detachable head and with silver-gilt mounts, dated 1582 and kept in the Metropolitan Museum of Arts, New York (inv.n° 17.190.534a,b).

Silver animal figures were very popular in the 16th and early-17th centuries. Most of these objects were manufactured in southern Germany, especially in Augsburg. Next to hens and cockerels a.o. goats, oxen, wild boars, bears, and pacing horses were chased in silver. In Antwerp owl beakers were made, of which head and body could be taken apart to enable people to drink from the cup. Such beakers were possibly precursors of the present figure.

In Holland such table pieces were less common, with the exception of Dordrecht, where in a short period a number of cockerel and hen jugs were made. Most of these pieces were manufactured by the master HB. In the past it was assumed that these animal beakers were the output of Huybrecht van den Bergh. Recent research by Hans Breet brought to light that the animal pieces such as the swan box (previously dated to 1639) in the collection of the Rijksmuseum (inv. n° BK- 16381) as well as the hen (1617) and cockerel vessels (1616) in the museum Huis van Gijn, Dordrecht, arose during the first decade of the 17th century in Dordrecht. The large number of similar works has drawn comment in the past, however, it is significant that a further example has come to light. Preserved in the royal collection in Gotha, Germany, it is recorded as a gift to Duke August von Sachsen-Gotha-Altenburg (1772-1822) in an inventory dated 1819. The maker’s mark of these table pieces, therefore, must be given to Hessel van Buren instead of to Huybrecht van den Bergh (see Breet, p. 75 and 76). Although in the past the dates of these birds have been doubted, recent research proved that the aforementioned cockerels and hens as well  as the present hen by Holstwyler are definitely datable tot the early 17th century. 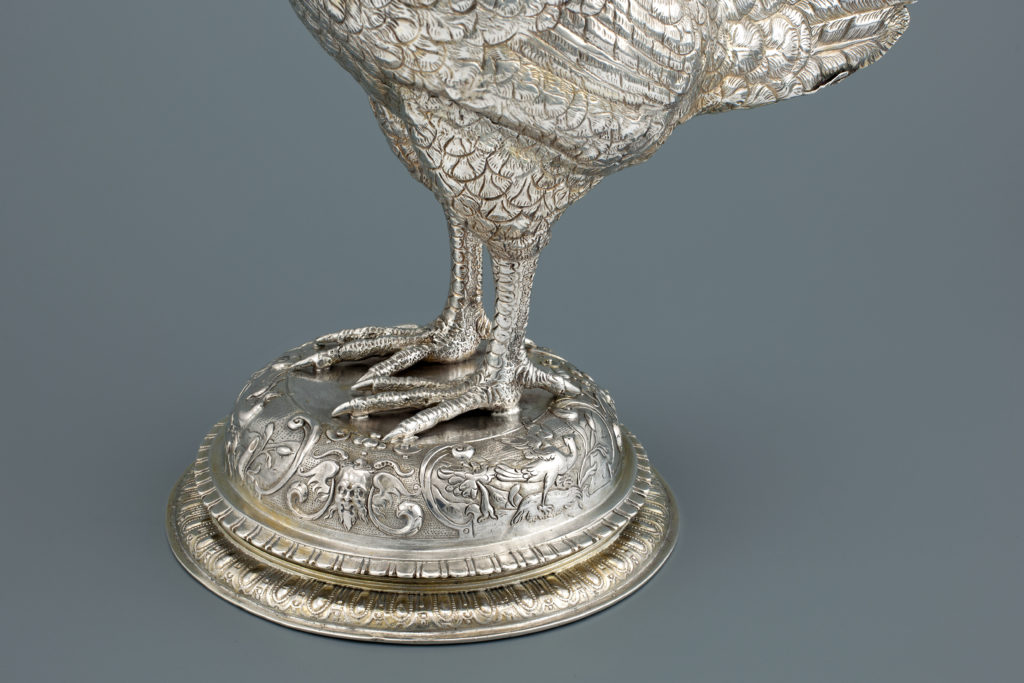 It is remarkable that especially the hen and cockerel figures were so popular in Dordrecht. The latter is regarded as an attribute of the apostle Peter, referring to his denial and regret about that. Also it refers to vigilance or voluptuousness, hence it can be understood why a hen could be used as a table piece to drink from. In the New Testament the hen is regarded as the symbol for protection of the weak. However, most probably these pieces were seen as marriage gifts. At wedding feasts chicken was often on the menu, because the strong sex drive of the cockerel as well as the egg producing hen made them into fertility giving symbols.

The manufacturer of this hen-shaped jug and cup is Edu(w)ard  Reynierszoon Holstwyler, a silversmith born around 1545 in Dordrecht. His exact date of birth is unknown, but from a record dated 1575 we know that he was 30 years old at that time. Holstwyler married in 1578 to Mechtelt Verstegen van den Bossche and a second time on 21 January 1596 to Lysbeth Adriaensdr Spruyt. His daughter from his first marriage, Hester, marries in 1590 Jacob Hendricksz. Goudsmidt van Hoorn. In Antwerp two 16th century goldsmiths with the surnames of Holstwilre and Holtwilder are mentioned, both originating from London. Possibly it concerns members of the same family.

In 1580 Holstwyler is mentioned in the register of the fiftiest token, which was a transfer tax for real estate property of 2%, for a house in the Steegoversloot, estimated value of 12.4 florins. He is once more mentioned in 1604. Holtswyler lived in the Steegoversloot, next to the church of St. Augustin. Another piece in silver by him is known: a chased deep dish, dated 1597, in the museum Huis van Gijn (inv. n° 11140). This beautiful dish is centred by a portrait medallion of Prince Maurits which is surrounded by a lobed rim, reminiscent of the lobes that are found in the foot of the present hen.

The coat-of-arms engraved on the underside of the foot is quite remarkable and had not previously been identified. In spite of the wear to the shield it is possible to determine that the arms are most probably for the prominent Dordrecht family of Wenssen; being blazoned as ‘party per fess, three pot-hooks [schoorsteenhalen] in chief with a chevron in base’. The charge of three potshooks is rare in Dutch heraldry and the Wenssen family bore them with a chevron accompanied by three escallops. The branch of the Wenssen family, which bore these specific arms stems from a marriage in 1485 between Aert Hendricksz. Zwijndrecht (circa 1460-1534) and Anthonia Wenssen (circa 1465-1561), the daughter of Jacob Jansz. Wenssen (circa 1435-circa 1492), raad [councillor] of Dordrecht. Aert was a wealthy Dordrecht timber merchant and served as raad [councillor], schepen [alderman], and burgemeester [mayor] of the city. The relation between the arms of the Wenssen van Zwijndrecht family and the maker’s mark on the hen remains hitherto unclear.

Unusually the Wenssen van Zwijndrecht arms, which seem similar to the maker’s mark of Holstwyler, were assumed by their two grandsons. The elder was the lawyer Adriaen Wenssen (died 1592), an attorney at the Hof van Holland [Court of Holland]. He also served as a pensionaris [pensionary] of Dordrecht and was a member of the Hoge Raad [Supreme Court] of Holland, Zeeland and West-Friesland. The younger was Jan Wenssen (died 1588), a timber merchant and schout [bailiff] of Dordrecht. Both Adriaen and Jan Wenssens had three sons; Jacob, Jan, Arent and Jacob, Cornelis and Nicolaes, respectively. Adriaen and Jan were both dead by 1601 and the deaths of the others are nor recorded, therefore it is not possible to precisely determine the family member to whom the cup might have originally belonged.

After 1970 the hen was acquired by Winston Frederick Churchill Guest and his wife Lucy ‘C.Z.’ Guest, née Cochrane, whom he had married in 1947 in Havana, Cuba, whereby Ernest Hemmingway officiated as a witness. Winston Guest was a famous British polo-player, named after his godfather, Sir Winston Churchill, former British PM and a cousin as well as best friend of his father, Frederick E. Guest, who was a grandson of the 7th Duke of Marlborough. His mother, Amy Phipps came from a well-to-do family, who had earned its fortune in the Carnegie Steel Corp industries.

C.Z. Guest was a New York actress and socialite, often photographed to be published on the covers of popular magazines such as Time. Much photographed, she was also painted by Diego Rivera, Salvador Dalí, Kenneth Paul Block, and Andy Warhol. Because of their enthusiasm, keen eye and feeling for style and quality the Guests learned how to combine precious antiques with contemporary art, such as paintings by their friend Andy Warhol. They belonged to the most influential taste determinants of the second half of the 20th century in America. 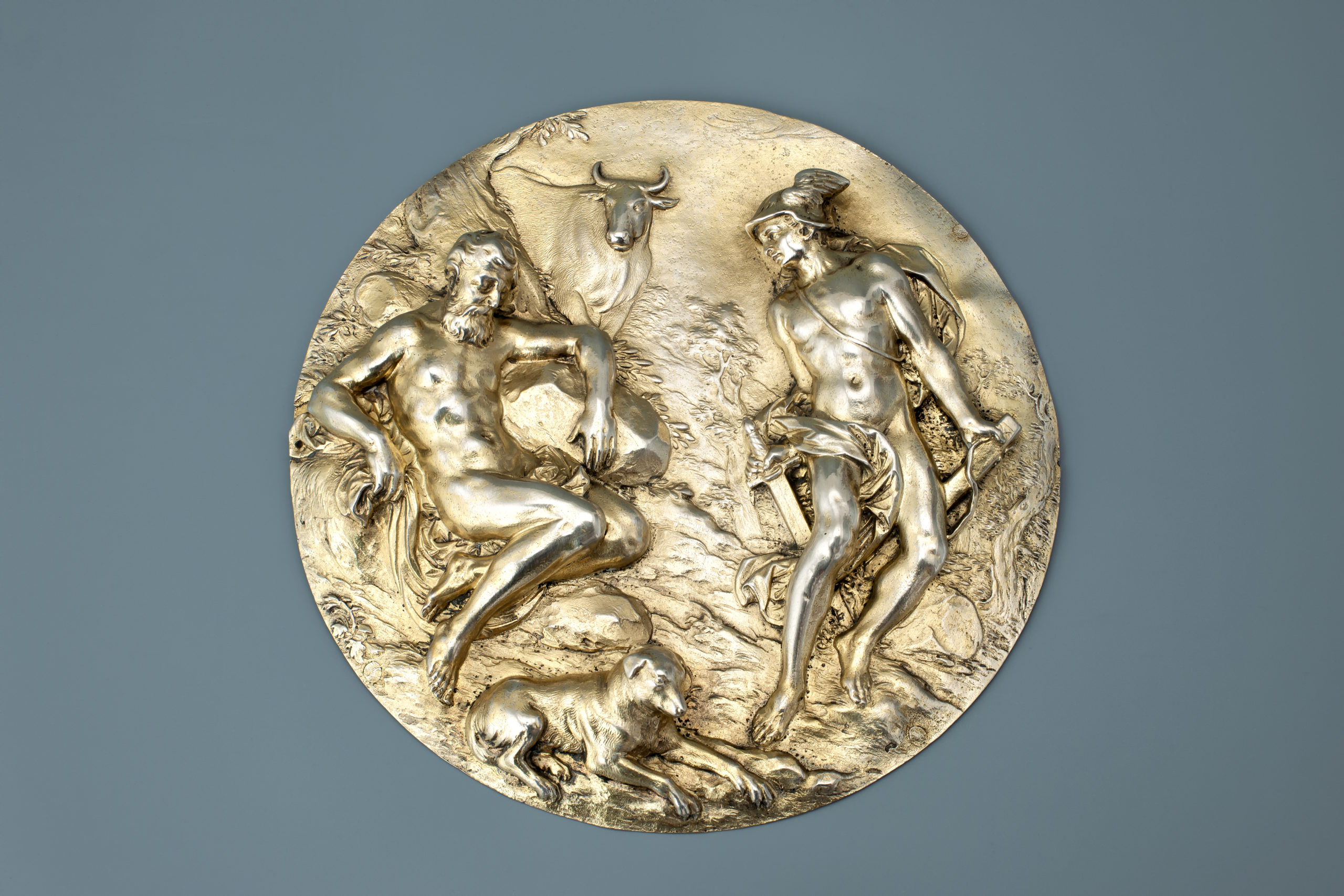 A scene chased in high relief based on a story from Ovid’s Metamorphoses, I, verses 668-721. Argos is…