The case by Samuel Simons, the movement by Steven Hoogendijk, Rotterdam, 1730

The cast and chased outer case with a mythological scene telling the story of  the hunt of the Calydonian boar hunt, by Meleager, Atalanta, Castor and Pollux (Dioscuri) and Jason, set in a landscape, surrounded by a so-called Bérain moulding containing four medallions with scenes related to hunting. Between the medallions the pierced scrollwork has eight dolphins. The shoulders of the outer case have respectively two birds, a dog, an angel head and a handbow and quiver containing arrows. The outer case is fitted in a protection case covered in black shagreen and decorated in a star pattern with small piqués, or rivets.

The fusee movement has a verge escapement with a half-quarter repetition on one bell, that strikes hours, quarters and half-quarters after pressing the pendant. The champlevé dial has a Roman chaptering and blackened and striped minute arches with stylised gold fleur-de-lys motifs to mark the half hours, centred by pierced, black steel hands, the outer chaptering in Arabic indicating fifth minutes placed in simple cartouche-shaped reserves.

The dished centre has a chased image of a reclining female as symbol of science, represented here as the goddess Gaya, the primeval mother of Earth, flanked by a globe to her right, and a banderole above here, in which is an engraved signature ‘Hoogendijk’. The suspension ring is shaped as a stirrup, for this time and age a popular model. The pendant and stirrup are characteristic for repetition watches and are applied by three small screws instead of riveted . 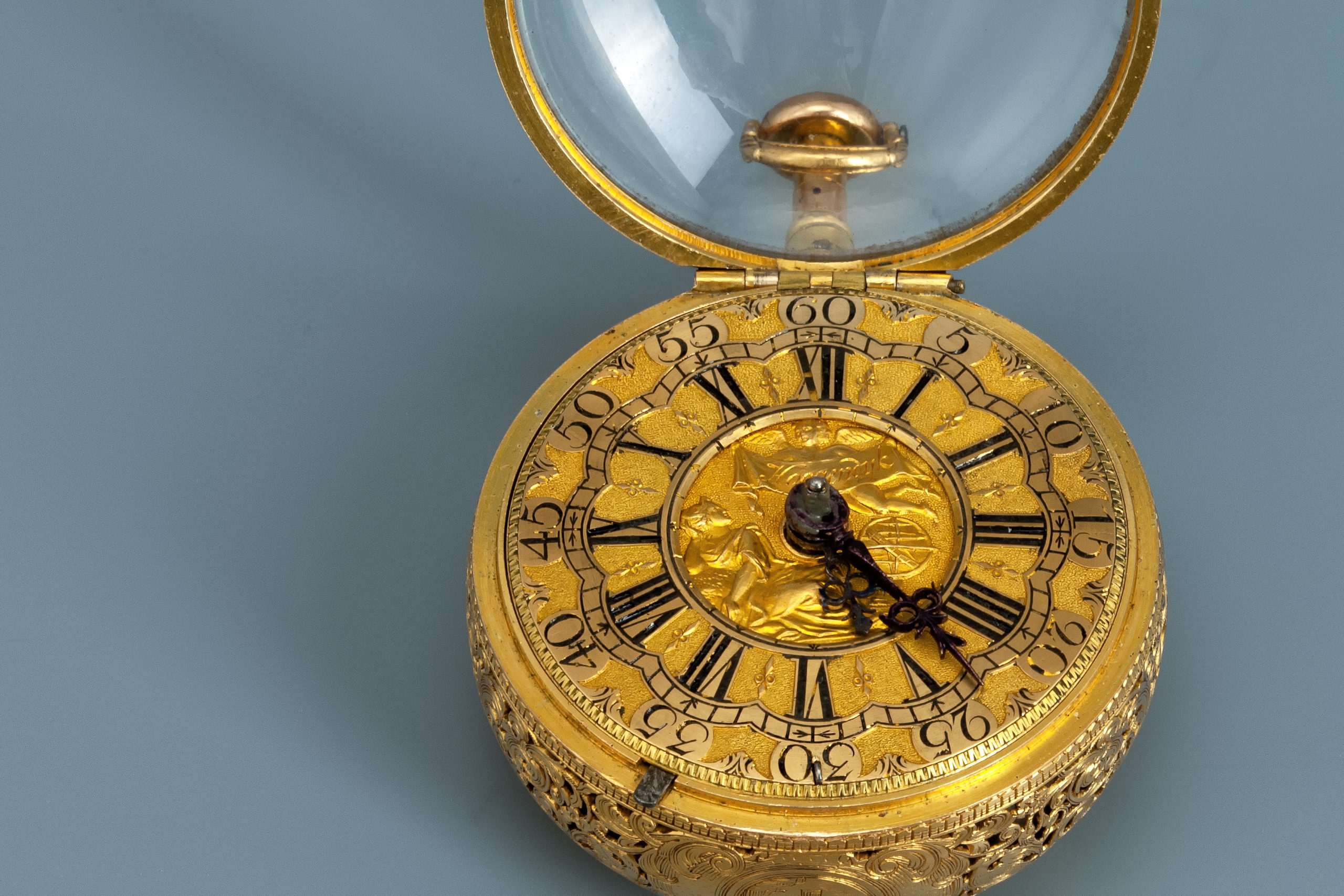 The Dutch fire-gilt symmetrical cock is decorated with floral motives, surrounded by beautiful foliate piercing without finished edges, in which a squirrel is hiding. Circular functional pillars on pedestals are hidden by a silver dust cover, which is also signed. Such protection covers do not appear before 1715 and only rarely after 1725. After 1727 mainly watches of high quality are fitted with such dust covers in silver.

The watch has a half-quarter-repetition movement with two hammers on a bell. After first pressing the pendant, the passed hours are chimed with a single stroke, afterwards the quarters with a double stroke and finally the halve quarters by a brief angel stroke. This stroke mechanism is an invention of Daniel Quare of London (1648 – 1724), who introduced the repetition movement in 1687. The application of repetition for half hours dates to 1695. It is the merit of Quare that with only pressing the pendant once, the hours as well as quarters and half-quarters were automatically repeated. As is the case with most watches,

the example discussed here also has  a mechanism that avoids miss-strokes, the so-called all-or-nothing mechanism, also known as tout-ou-rien.

The movement also has a so-called sourdine of muffler, whereby the time is only noticed by feeling. By pressing a little pin that protrudes above the case, without looking, in order to be discreet and silent, one could ‘feel’ the hour in the day, because one could feel the hammer punching. This mechanism is known as répétition à tact  and was invented by Julien Le Roy (1686 – 1759); (unlike répétition à toc, a mechanism that has no bell but only a small silver bloc-shaped element in the case edge, on which the hammers punch, the so-called dump-repeater). 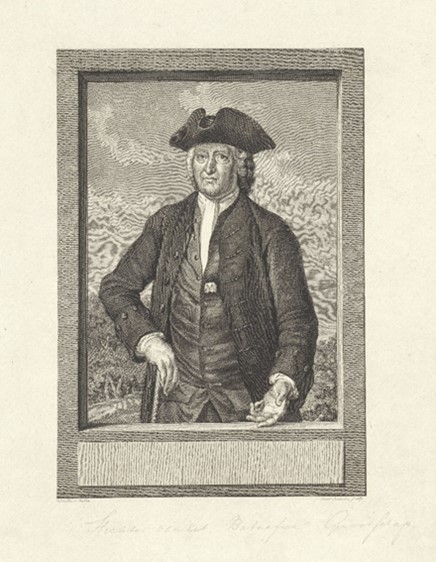 Steven Hoogendijk (1698 Rotterdam 1788) was a watch and instrument maker and phycisist. He was initially taught by his parents, the clockmaker’s couple Adriaan Hoogendijk and Elizabeth Tracy, and consecutively by Hendrik Overbury of Schiedam, Johannes van Ceulen the Younger and Cornelis Uyterweer. Aged 25 he was appointed as city clockmaker in Rotterdam.

His output contains at least ten table clocks, as many longcase clocks, and a handful of pocket watches, a.o. the example discussed here. His movements show reminiscence with the movements made by his British colleagues, among which is the repetitions strike system developed by Daniel Quare of London (1648-1724). In all probability Hoogendijk also used parts imported from abroad.

Thanks to a frugal life and the inheritance left to him by his brother Thomas, he acquired considerable wealth. In his last will Hoogendijk declared that after his death the Bataafsch Genootschap der Proefondervindelijke Wijsbegeerte (Foundation for the Furtherance of Experimental Philosophy, a term now called Science) would inherit his fortune. His estate would be more than sufficient to secure the foundation’s financial future for a long time. The society met as a gentlemen’s club of amateur scientists and had its siege at the former stock exchange building. The board rules that a competition had to be held annually, regarding for instance water management; also experiments had to be performed and instruments developed. Hoogendijk himself produced a.o. telescopes, pyrometers and pedemeters.

In 1745 Hoogendijk was appointed as supervisor of the water mill near the Oostpoort at Rotterdam. During his term he came to understand that the mills did not function as required during high water or calm weather. The first secretary of the Foundation, Lambertus Bicker, therefore suggested the use of so-called ‘vuurmachines’ (steam engines) instead of water mills. Ultimately, at the initiative of Hoogendijk, a steam engine was installed, near the Oostplein. Because this engine did not function optimally, in 1787 a second machine was installed in the polder Blijdorp.

Marked on the outer case:

Town mark: Rotterdam: docked shield, the upper part divided in four with two lions to either side, the lower section with vertical bar

The case by Samuel Simons, the movement by Steven Hoogendijk, Rotterdam, 1730

A scene chased in high relief based on a story from Ovid’s Metamorphoses, I, verses 668-721. Argos is…