The engraved, chiselled silver binding with green velvet lining, the interior with hinged sundial and compass, a mirror, and a finely engraved silver plaquette with a depiction of Ceres holding a cornucopia in her right arm and a sickle in her left hand, to the right her daughter Proserpina offering a flower, screw-on silver pin; the open-worked front with stylised scrolls ending in bird’s heads, squirrels and corn flowers, surrounding a central medallion with gadrooned border enclosing an engraved tree with double crown, the upper section with a winged and twisted female half figure between snails, hinged lock at the centre, the upper angles each engraved with a cornflower and tulip amongst scrolls, the lower angels with a dear and a rabbit respectively, set in an oval medallion within gadrooned border, the angles engraved with foliate corn flowers, the spine with triple division between ribs, the centre with a loop suspending a silver chain with key.

This book binding is dated between 1595 and 1620. Two comparable examples, albeit with empty central medallion, are in the respective collections of the Rijksmuseum (inv. n° BK-KOG-1693 and dated 1597 and inv. n° BK-1961-5, dated circa 1600-1625, containing engraved portraits of the princes Maurits and Frederik Hendrik); a third is the Album Amicorum that was made for Hans van Loon and Anna Ruychaver, who married in 1597, and that is now in the collection of the Museum van Loon, Amsterdam (inv. n° 2562).
Others are in de collections of Museum Boijmans-van Beuningen, Rotterdam, (inv. n°s MBZ.1 and MBZ.2), the British Museum, London (inv. n° 1978,1002.41), the Victoria and Albert Museum, London (inv. n° M.154-1939), with the arms of Simon de Rijck and possibly a member of the Van der Dussen family. 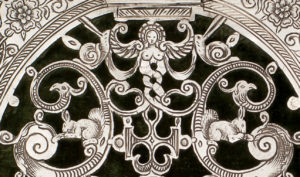 The style of all these pierced covers is reminiscent of the engravings of Theodore de Bry, particularly his floral ornament inhabited by exotic birds and other animals which surrounds the oval portraits. The dissemination at this time was rapid and no doubt the Amsterdam workshops were quick to copy from other parallel sources; however, the seemingly endless variations which those silversmiths introduced have resulted in a series of objects with superficially similar designs but, on closer examination, interestingly varied interpretations. Exact repetitions are the exception.

The present binding, like the other examples, is unmarked and has a central medallion on both sides for the purpose of a coat-of-arms. Here we find a planted tree with double leaf crown on one side. There is no heraldic hatching, which is not unusual for silver objects of this age: this custom did not come into vogue until the 1630s. The engraving of the binding is of high quality, at the same time decorative as well as stylised. 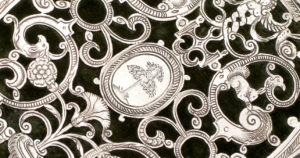 The arms are undoubtedly Dutch, probably from the province of Holland, since there are several families who carry a planted tree on a grass ground in their arms. There is no crest, nor a monogram, initials or a specific date that provide guidance. The place of manufacture of the piece is not exactly known, albeit that on stylistic grounds it may be assumed that it was made in Amsterdam.
The binding must have been made for an important (probably urban) and flourishing family with such arms, probably regents or a family of comparable sort. Wealthy Catholics, Mennonites or Remonstrants could not perpetrate into regent’s circles, but could well have afforded a costly binding such as this.
The tree has two crowns, the upper one reduced in comparison to the lower crown. During the period coats-of-arms were not always uniform. Within one family a tree could change from one to two crowns, this was not uncommon during the early 17th century. 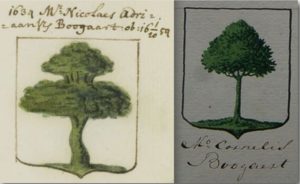 The coat-of-arms that completely matches the one found on the book binding belongs to the Delft regent’s family Boogaert. Mr Nicolaes Adriaansz. Boogaert, who passed away in 1654, used in 1634 a green leafy tree with two crowns on a green grassy ground.
Genealogical research has pointed out that since only one of the two central medallions is engraved it seems plausible that Adriaen Corneslisz. Boogaert (1580-1619), was still unmarried when the binding was commissioned. It is possible that it relates to his law-school years at Leiden University (starting in 1597), since such small treasures were ideally suited for an Album Amicorum, which at the time was very much en vogue.

Mr Adriaan Cornelisz. Boogaert was born in Delft on 9 March 1580 (the son of Cornelis Adriaensz. Boogaert, a chaplain from 1597-1617, a director of the Delft Chamber of the VOC from 1602, and Adriana Dircksdr. Van Santen), and was baptised on 15 march 1580. He enlisted at the law faculty of Leiden University in 1597, was subsequently active as a solicitor, died on 5 August 1619 in Delft, and was buried in the Oude Kerk in that city on 8 August. On 7 September 1604 he married Margaretha Paulusdr van Beresteyn, who was born at Delft on 23 April 1583; she was a regent at the Oude en Nieuwe Gasthuis in 1625, later at the Nieuwe Weeshuis, and passed away at Delft on 29 October 1639; she was buried in the Oude Kerk in that city on 3 November 1639.
Margaretha was the daughter of Paulus van Beresteyn, a brewer and tradesman in madder, wine and herbs at Delft and Volkje Claesdr Knobbert.
From this marriage eight children were born between 1605 and 1618, amongst whom the aforementioned Nicolaes Adriaensz. Boogaert, who was born in Delft on 7 June 1605 and baptised on 15 June. He married on 4 November 1631 Eva (Aefje) Gijsbertsdr Briel[s], the daughter of Gijsbert Briel and Anna van der Dussen, who was born in Delft on 10 October 1604. Boogaert became a member of the Veertigraad ( a group of 40 significant burghers who were involved in appointing the administration of a city) in 1634, commissioner for marital affairs in 1635, member of the city council in 1636 and 1637, orphan master in 1639 and 1640, and again in 1644 and 1645, tax collector, adjunct ter dagvaart from 1641-43 and 1648-50, burgomaster in 1651, 1652 and 1653, church-master in 1653, and deceased at Delft on 20 January 1654; he was interred at the Oude Kerk there on 26 January 1654. His widow, Aefje, passed away on 26 February 1659 and was buried at the Oude Kerk, Delft, on 4 March.

It is beyond any doubt that a binding of this high quality must have belonged to a scion from a very important and well-to-do family in Holland and the attribution to the Boogaert family seems clearly proven. As is argued before, this rare specimen rather belonged to a studying patrician’s son than to a young and ambitious merchant. Moreover, the overall quality of the beautifully engraved book binding suggests a place of manufacture in a culturally flowering city such as Amsterdam or Delft, by a skilled and capable silversmith rather than to a colleague in a smaller, more provincial city. 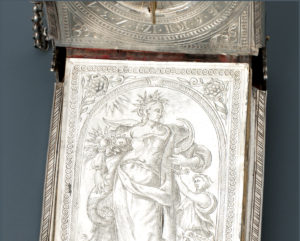 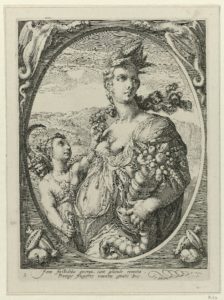